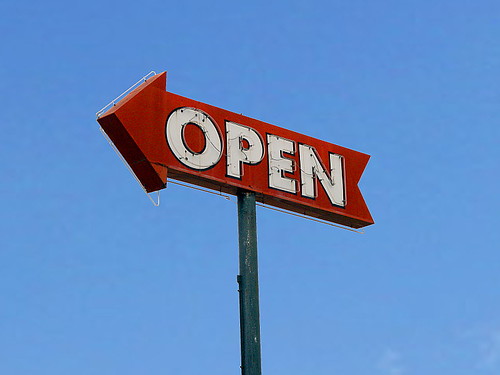 I’ve been curious about how much of scholarship is now open access, but recent news of universities such as Harvard and UC San Francisco requiring faculty to either publish in open access (OA) journals or post their work in publicly accessible repositories prompted me to want to undergo a more serious examination of this question.

There are three main quantitative measures researchers use to answer this question:

Let’s address each of these in turn, and then I’ll conclude with implications for what OA will look like in 10 years

The percentage of all scholarly journals that are OA

A study by Bo-Chister Björk and colleagues finds that in 2009 there were 4,769 OA journals with an 18% yearly growth rate from 1993 to 2009. The directory of open access journals (DOAJ) now lists 7787 OA journals, out of a universe of approximately 26,000 scholarly journals total (calculated using Heather Morrison’s methodology), so somewhere between 24% and 29% of all journals are open access. An important note is that while there are thousands of OA journals, they constitute less than 24%-29% of all articles published because many OA journals are newer and hence have fewer back issues, and many OA journals publish fewer than average articles per year – which leads us to …

Approximately 1.5 million scholarly articles are published per year. Björk and colleagues estimated in 2009 that 7.7% of all articles published were in OA journals. Richard Poydner draws on Björk and Gargouri to conclude that “around 30% of the academic and scientific literature published in 2011 worldwide may now be freely available on the Web, two thirds of it as Green OA and one third of it as Gold OA.” For reference, gold OA generally refers to OA journals while green OA refers to public repositories with either the published article, a pre-print version, or a different post-print version (for more, see Peter Suber’s overview). The Open Access Directory estimates that 94.9% of non-OA journals permit “authors to self-archive their preprints, postprints, or both, according to Eprints statistics.”

Indexes such as ISI and SJR are important because they give an indirect measure of how important an individual articles is both within its field and within academia more broadly. Articles that are not indexed are generally not being cited by other scholars and not being published in journals that have other important articles. The question of how much of the indexed scholarship is OA is important for gauging the importance of OA scholarship as well as an indicator of whether OA literature is, on average, as important as non-OA scholarship.

Scholars offer case studies to support OA scholarship, such as the example of the OA journal Cancer Journal for Clinicians, which “is the 4th most heavily cited journal among ALL journals indexed. With 62 citations per article based on SCImago calculations, its articles on average appear to be the most highly cited of any scholarly journal of any kind.” Similarly, PLoS One has been ranked #1 since the first year it was tracked.

From a macro standpoint, a study by Elena Giglia concludes that while the results are mixed, OA journals are competing from a 5-year impact factor standpoint with older journals, and she expects OA journals to gain reputation as they age, and in certain fields such as law open access scholarship is actually more cited than non-OA.

Implications for the next 10 years

Springer offers a projection through 2020 that is revealing. It assumes 3.5% growth of all scholarly articles produced and 20% growth of OA articles, and concludes that it expects about 25% of all articles to be OA in 2020. This is higher than 0.5% annual growth Bjork estimates, which based on OA constituting 7.7% of the article volume for 2009 would only anticipate 13.2% of all articles being OA in 2020.

I would expect that if the wave of college and university OA mandates continue (there are 148 institutions who have mandates currently) this would accelerate OA publishing, especially if the mandates require publishing in OA journals versus requiring green OA in public repositories.

It’s not clear to me how increased mandates and more OA articles will affect non-OA journal pricing. I could image an overall decreased demand for journals as scholars access articles via searches and aggregators such as Google Scholar, but I can also image scholars still wanting their libraries to purchase access to all scholarship and thus demand remaining steady or even rising as more content is free to paid content becomes even more premium (think the HBO model). Ideally, the price of journals would drop to the point where the value seems more in line with cost – which again points to journals decreasing prices until in line with value: PLoS ONE is an example of OA leading to reduced journal costs, as it costs 1/8 the average journal price.

In summary, conservative figures expect OA publishing to constitute ~15% of published scholarship in the next 10 years, moderate calculations arrive at ~25%, and more hopeful numbers point to potentially 40%-50% of scholarship being OA in 10 years. I’m excited that Scholastica is rolling out an OA publishing solution that builds on our peer review functionality, and I’m excited to be part of the OA future.