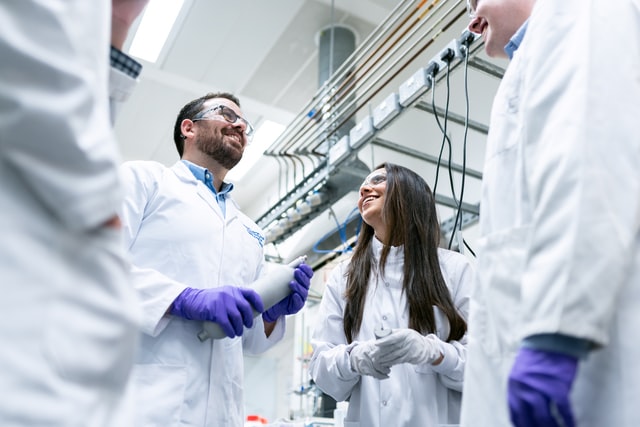 Since its founding in 1958, RTI International, a nonprofit research institute developing science-based solutions to help organizations address pressing global challenges, has been an epicenter of scholarly discovery. RTI’s work yields a mix of traditional academic research articles, policy documentation, and hands-on industry publications. So, when the RTI team launched its publishing arm, RTI Press, in 2007, they decided to do things a little differently to support a wider breadth of research outputs.

Rather than starting a specific journal or journals, RTI registered ISSNs for the various types of research it produces, including policy briefs, methods reports, and research articles. RTI publishes content in those different forms on a rolling basis all under the RTI Press umbrella. RTI Press publications are Diamond Open Access (OA) meaning they are free to read and publish in.

“Our work is peer reviewed before acceptance, so RTI Press publications are on the same level as a journal. We just offer a different route and a different format to publish research,” explained Annie Gering, Publishing Editor at RTI Press. “Because we’re a research institute, the things we publish have a greater emphasis on implementation, policy, and practitioners. We work with a broad spectrum of stakeholders and subjects.”

As RTI Press has grown, the team has sought opportunities to keep optimizing their publishing operations and expand the press’ reach. In recent years, two areas they decided to focus on were improving RTI Press’ submission and peer review experience for editors, authors, and reviewers and producing articles in more digitally driven and index-optimized formats.

“We used the same submission software for about ten years, and we were having some user friction with it,” said Gering. “At the same time, we knew we wanted to start publishing in HTML to have responsive, more search-optimized content, and we needed help with Google Scholar indexing because our entries weren’t always showing up properly. All of that led us to look for new publishing solutions.”

Improving the peer review process for all involved

When looking for a new submission and peer review system, the RTI team was eager to find a solution that would offer them the core manuscript management tools and automation they needed without overly complex workflows or steep configuration requirements.

“The previous submission system we used had features built on features and needed a lot of configuration. All of that made it challenging for us to use, creating a source of frustration for our authors and reviewers,” said Gering. “When we found Scholastica, we really liked the cleanness of the software. It’s very logical in the way it’s set up. Scholastica is streamlined, and it’s easy to see where to click and where to go.”

Since moving to Scholastica, Gering said RTI Press’ submission and peer review experience have noticeably improved for all involved, and they’ve also realized cost savings. “We wanted something easy to use foremost, and we were looking for an affordable solution. Scholastica has proven to be more cost-effective and much easier for users.”

Thinking back to their peer review system transition, Gering said it went seamlessly because the RTI Press team exported everything they could from their previous system. They were able to import past data to Scholastica via Excel sheets, including all of their reviewers.

“If I could give one piece of advice to publishers when switching systems, it would be to export everything you can. That made all the difference for us,” said Gering. “And any time we had a question, someone at Scholastica got back to us right away. With Scholastica, we know there are people actually listening to our feedback. Scholastica has even created new features based on that feedback, which is amazing.”

While the RTI Press team was looking for a more user-friendly peer review system, they were also in need of digital article production and indexing support. RTI Press had traditionally published all its articles in PDF format from the main RTI website. But they started finding it increasingly difficult to get those PDFs to show up in Google Scholar. When they learned about Scholastica’s production service, they realized it would enable them to have their articles produced in both machine-readable full-text XML and Google Scholar optimized HTML. They opted to also use Scholastica’s fully Open Access journal hosting platform for their research articles and other article-like publications to more easily publish HTML content and take advantage of Scholastica’s automatic Google Scholar indexing.

“We tried troubleshooting our PDFs in all kinds of ways. Sometimes things worked, and sometimes the same things would stop working. Part of that is because our primary hosting is through the RTI site, which isn’t designed to support content indexing like something created by a vendor. So, we knew we needed some help,” said Gering. “Our publications look so much better in Google Scholar now that we’re using Scholastica, and it’s been much more discoverable as a result. That’s our goal with Diamond OA. Readership is our currency, so it’s essential that people can easily find the content we publish.”

Gering said the ability to easily integrate Scholastica’s products and services has also resulted in welcome time savings when moving content from peer review to production and publishing. “I love the fact that I can import the metadata from Scholastica’s peer review system to its production service. In the past, I would have had to manually re-input all of that information. This makes it all happen in a few clicks.”

Fostering innovation through varied publications: Impacts of the RTI model

Over the years, Gering said RTI Press has been growing significantly with the help of software and services like Scholastica. “RTI Press has become a forum for people to publish peer-reviewed articles and also research in forms that aren’t always compatible with journals. For example, we’ve published guides for teaching early-grade reading in low- and middle-income countries. RTI Press is offering RTI researchers a way to get their work out there in ways they couldn’t have before.”

“When RTI Press started, we would go to scholarly publishing conferences, and it would be a bit difficult finding our niche — no one knew quite what to do with us because we weren’t a journal. But recently, there are more libraries, funders, and others who are creating publications like ours. And I think it will become more common to have these kinds of outlets for shorter or somewhat alternative papers,” said Gering. “For research articles, you still have the Journal Impact Factor ruling the game. But I think the fact that all of our publications are Diamond OA is another reason people want to publish with RTI Press and might choose it over a traditional journal. We don’t have charges, and we make our research truly available to share.”

Gering said the RTI Press team is considering supporting even more alternative publication formats soon. They are also focusing on improving the quality and richness of RTI Press’ Crossref metadata deposits. “In addition to registering DOIs for all of our content, we deposit a lot of metadata to back up those DOIs and give scholars a way to document their publishing beyond traditional papers.” In the future, Gering said she believes that registering DOIs for a wider variety of scholarly outputs will become the norm to support more robust research linking via alternate publishing routes like RTI Press.

“RTI Press offers so many opportunities to publish work that is relevant and topical but might not have had a home before, and there is a need for that,” said Gering. “I think this publishing model will expand into other areas. And it’s constantly evolving, which is very exciting.”