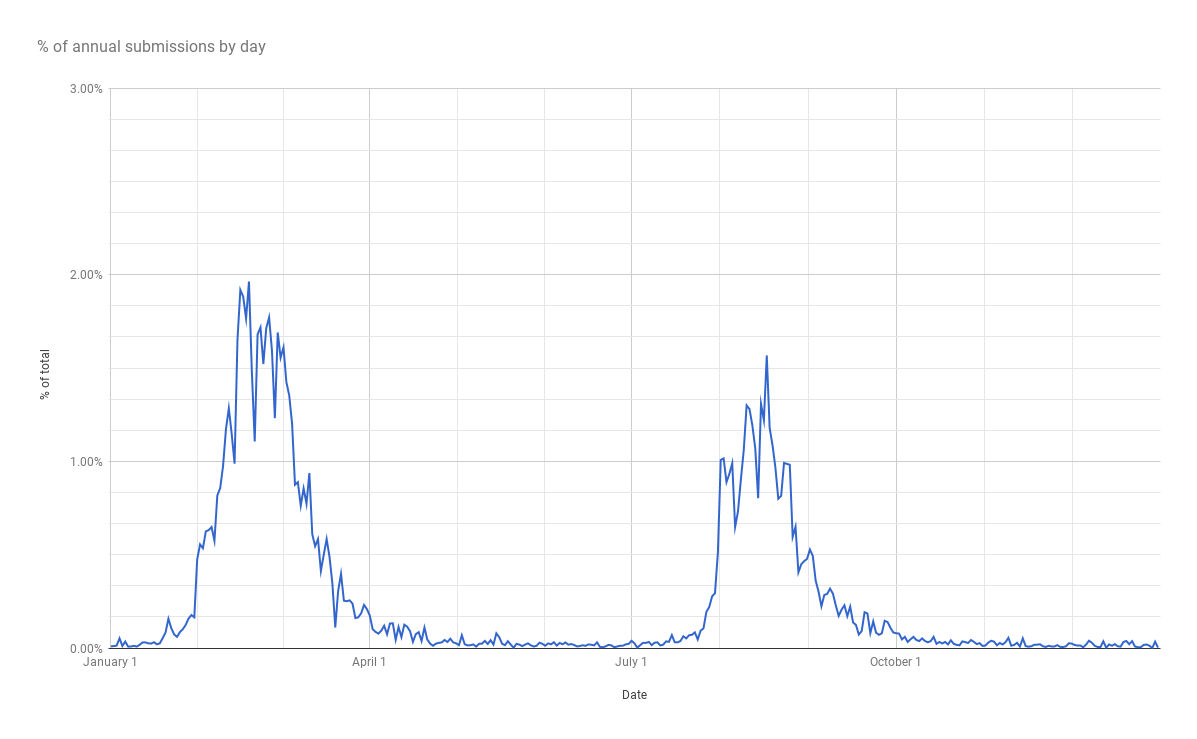 As we enter the busy fall submission season for law reviews, it seemed like a good time to update data from our 2015 post Law Review Article Submissions Insights. I know authors and editors alike are keen to see data-driven patterns, norms, and trends around submitting articles to law reviews on Scholastica. We also have richer data given that more law journals than ever are accepting articles via Scholastica.

This is the first in a series of data-related posts. The series will start with data about submissions (this post), followed by a post about expedited decision requests (a unique feature to the law review publication process), and ending with a look at decision-making behavior.

When do authors submit articles to law reviews?

To answer this question, I aggregated all submissions to law journals using Scholastica from 2012 to 2016 and calculated the percent of total submissions that were created for each day of the year (e.g. all submissions on January 1st across all years).

When do law reviews receive articles, based on their ranking?

I used the Washington & Lee law journal rankings to look for any submission differences by journal rank. Some methodological notes:

I had trouble eyeballing the differences, so made this handy-dandy GIF to animate the charts:

You’ll notice that as rankings move from low integers to larger integers (or from higher-ranked journals to lower-ranked journals), the percent of submissions received February 1 and August 1 generally decreases. My read is that submissions are slightly more spread out across the year for lower ranked journals, though still heavily concentrated in those two periods.

Here are the individual graphs that make up the GIF: 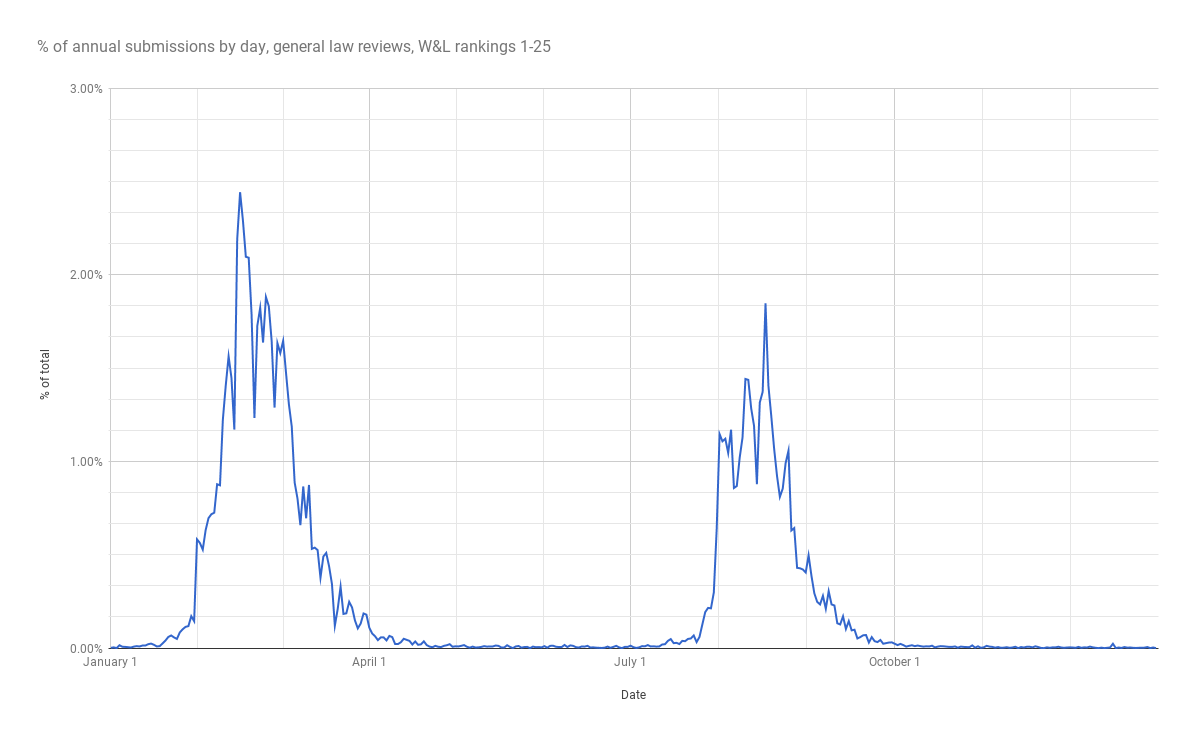 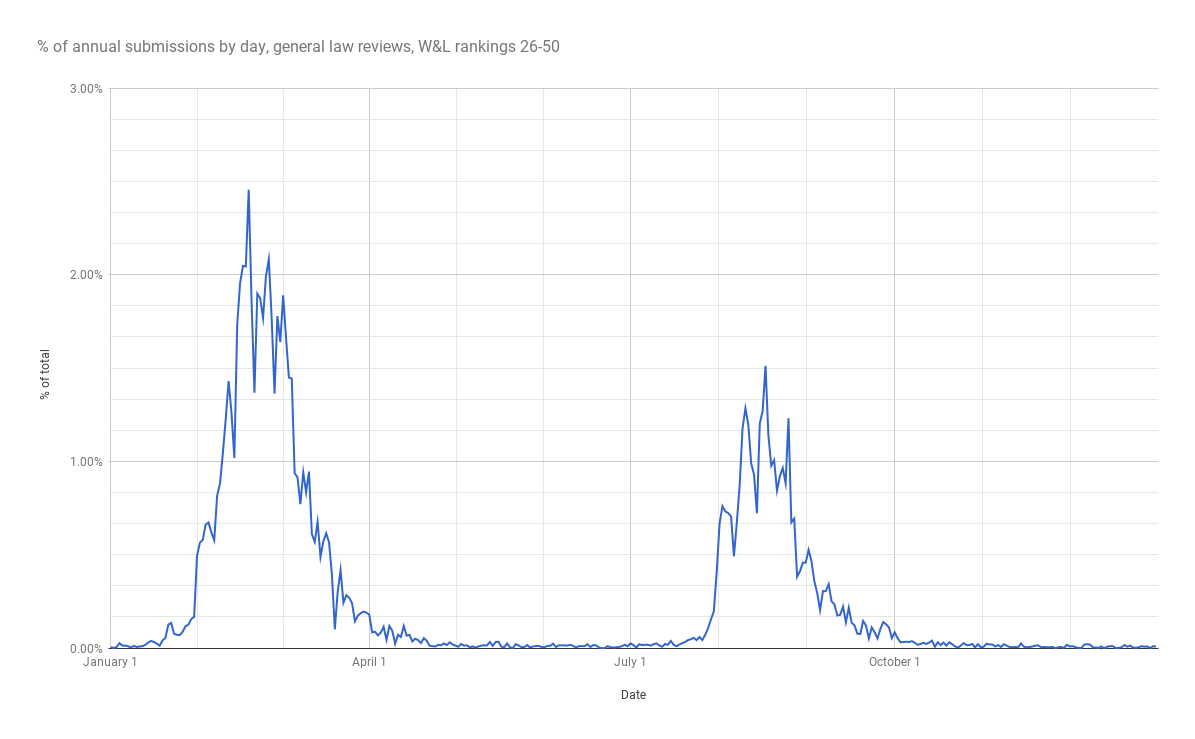 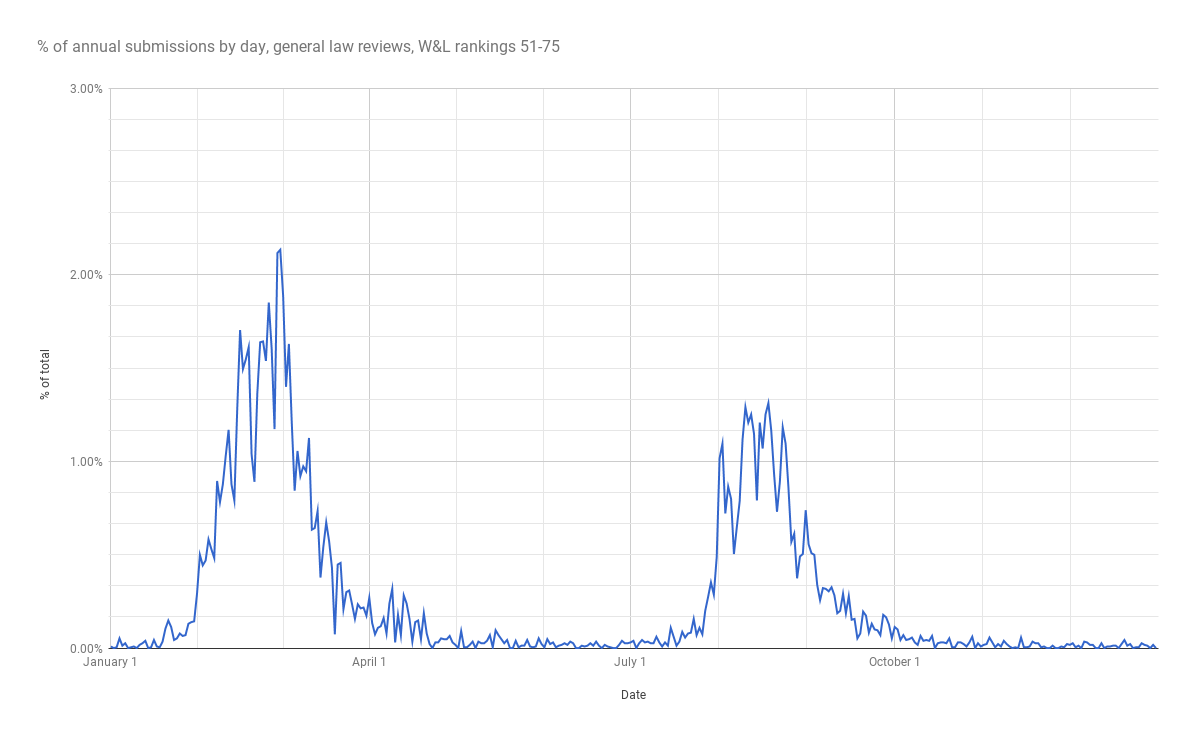 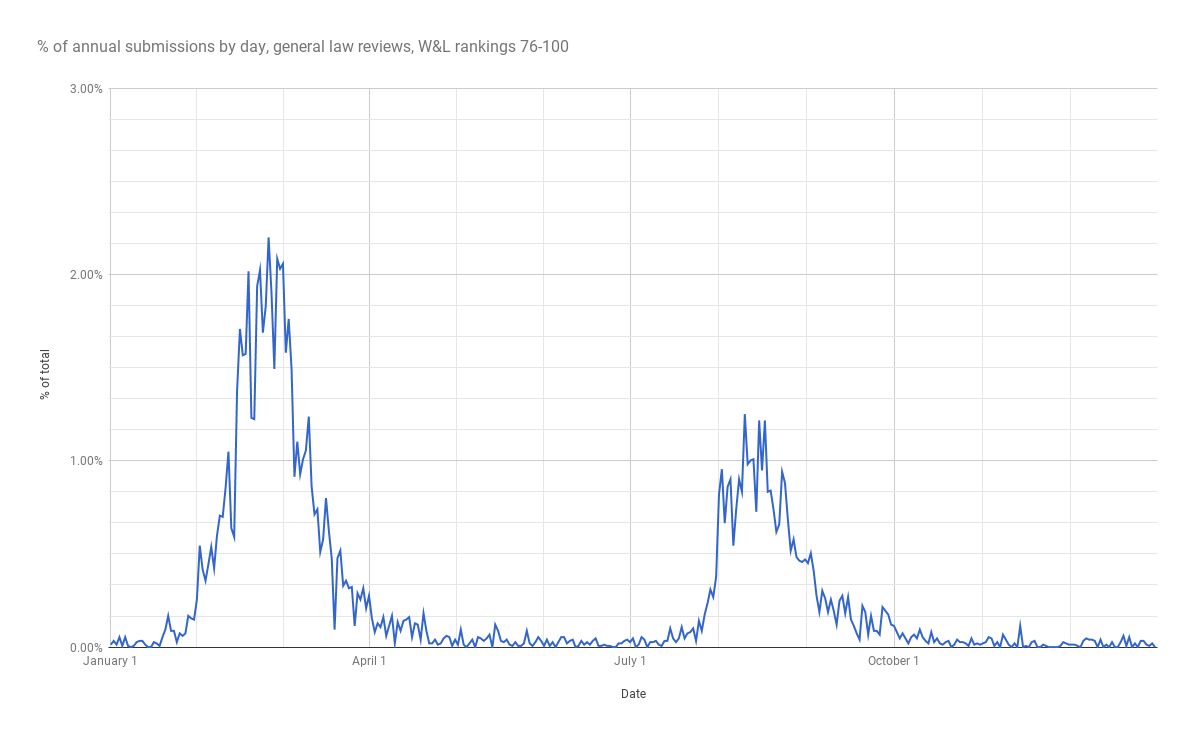 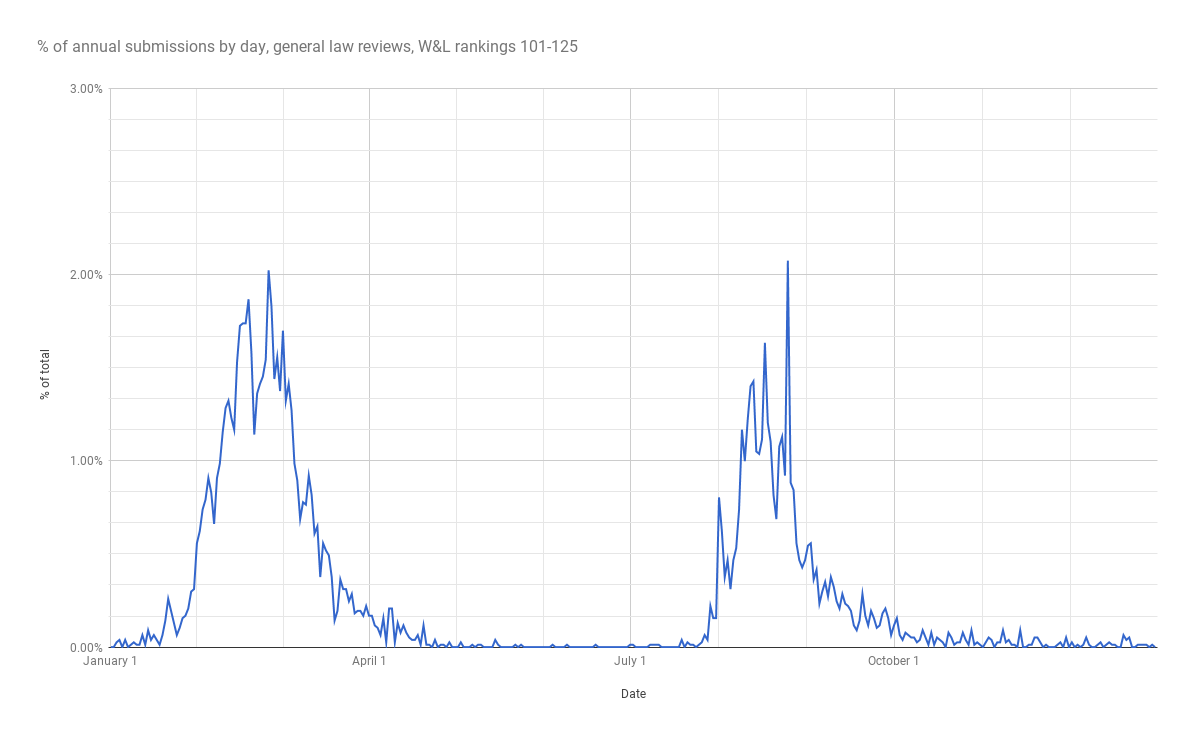 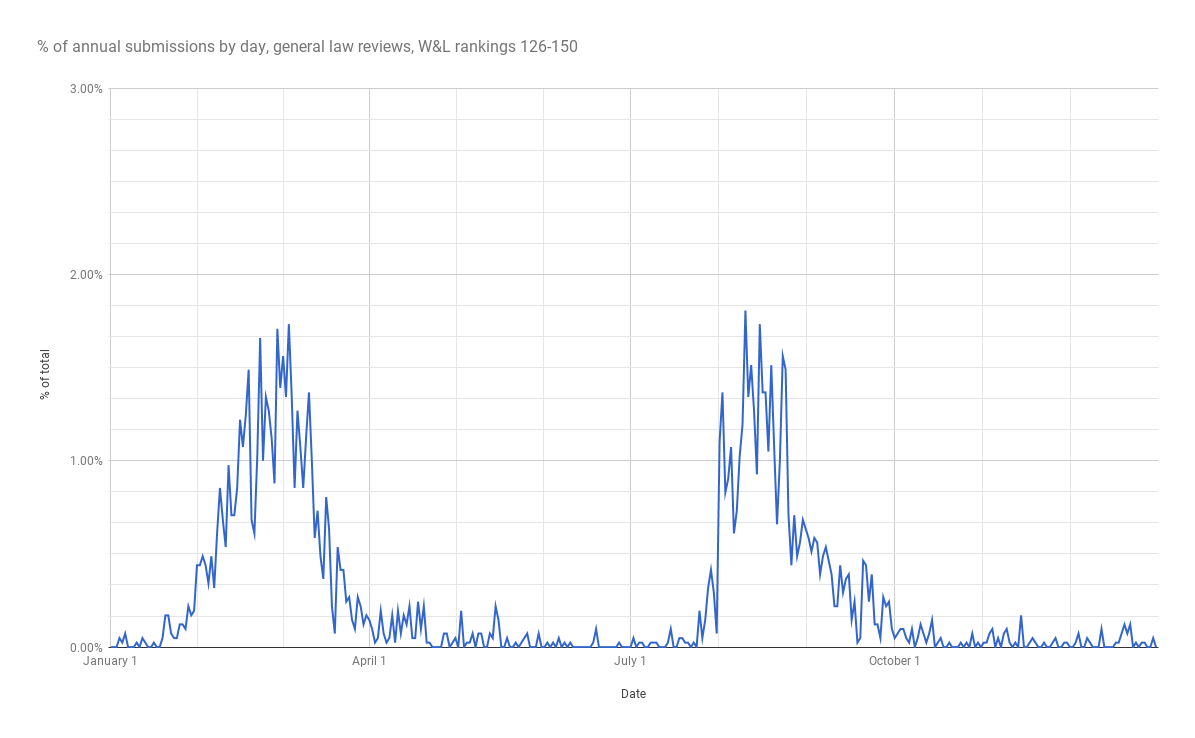 What days of the week do authors submit articles? 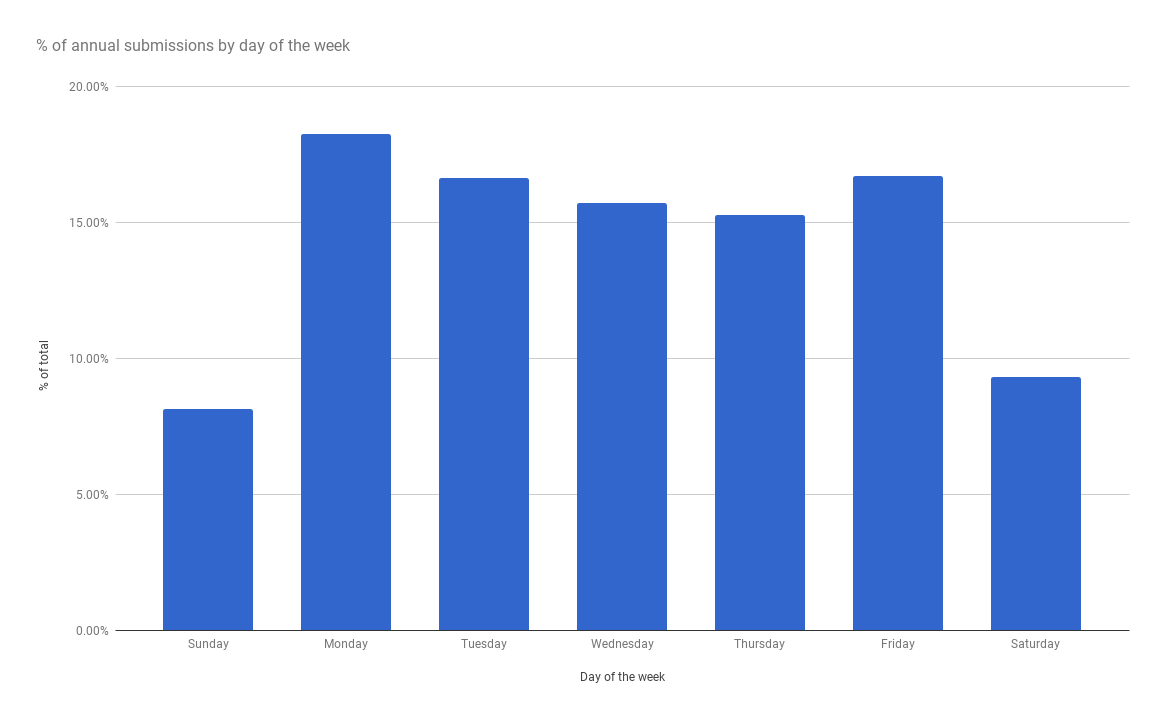 Mondays and Fridays are generally higher volume than other weekdays, and weekdays are noticably busier than weekends. Sundays are the lowest-volume article submission day, and Mondays see an average of 125% more submissions than Sundays.

That’s all the updated data for now - click here to read Part 2 of the series.