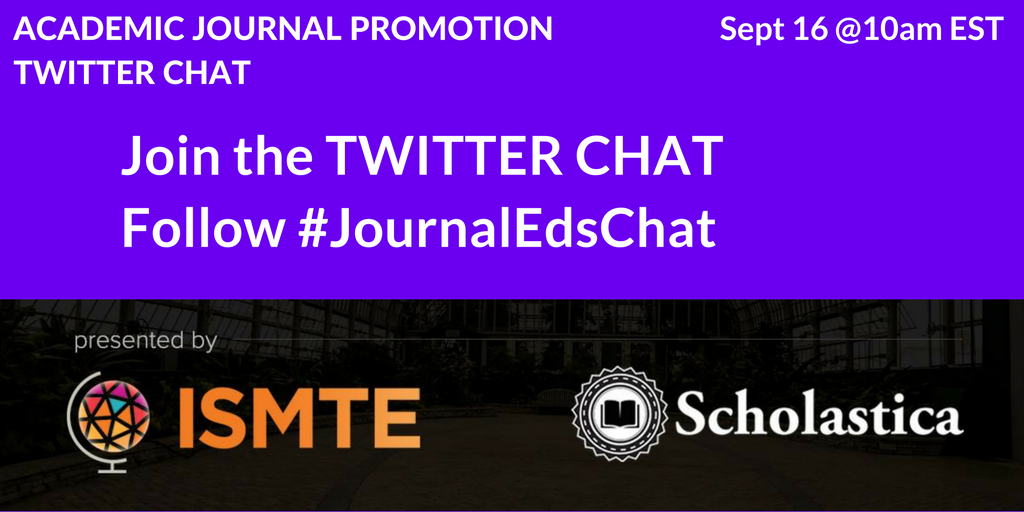 Friday 9/16/16 from 10AM-11AM EST Scholastica and ISMTE are co-hosting a Twitter chat on scholarly journal promotion using the hashtag #JournalEdsChat. The Twitter chat will be an open Q&A that all are welcome to join. Get the details below!

We know you may have some questions about what a Twitter chat is and how you can participate in this one, so here’s the lowdown.

To facilitate the Twitter chat, one of the hosts – in the case of our chat, Scholastica – will pose questions designated with a “Q” for question and a reference number in front (e.g. Q1, Q2…) to prompt participants to respond with “A” for answer and the reference number for the question they’re addressing (e.g. A1, A2…).

Participants should follow the Twitter chat hashtag via the Twitter search bar to see what questions are being asked and what others are saying in the chat. Be sure to periodically refresh the search page to ensure you see all the latest additions to the chat. Most importantly, join in the chat by asking and answering questions!

How can I participate in the Scholastica and ISMTE #JournalEdsChat Twitter chat?

To participate in the Scholastica and ISMTE Twitter chat this Friday 9/16/16, log into Twitter during the chat timeframe, 10AM-11AM EST, and type #JournalEdsChat into your Twitter search bar. This will pull up a feed of only tweets using the Twitter chat hashtag.

Scholastica will lead the Twitter chat Q&A from our account - @scholasticahq. As mentioned above, each question will be preceded with “Q” and a reference number. When you answer a question be sure to start your tweet with “A” for answer and the number of the question you’re addressing.

If you want to respond to a comment made by a particular person or ask a specific person a question, just put their Twitter handle at the beginning of your tweet. Keep in mind: if you want a tweet to be publicly visible you must put a word or character (usually a period) in front of the Twitter handle you’re mentioning. For example, if you wanted to publicly tweet a question or response at Scholastica you would have to put a period in front of our Twitter handle (e.g. “.@scholasticahq [question or response here] #JournalEdsChat”). If you want to have a one-on-one conversation with someone, start your tweet with just their handle. When you start a tweet with a person’s handle, only people who follow both you and that person will be able to see it.

What if I can’t fit my entire answer in a single tweet?

What do we hope participants will get from the #JournalEdsChat Twitter chat?

During this Twitter chat Scholastica and ISMTE will be posing questions to the group about all things journal promotion, from ways to use Twitter to promote publications to suggestions for revamping your journal’s website. Our goal for this Twitter chat is to give you and fellow editors the opportunity to share ideas about what you think journals should be doing to better promote published research, what challenges you think journals face when trying to promote their content, and insights from your experience promoting the journals you work with.

Participation is the name of the game! If you want to get a lot out of this Twitter chat be sure to be an active member in it.

Above all, approach the chat as you would a regular conversation. Everyone in the chat is eager to learn from each other and share resources, so don’t be afraid to jump in and start chatting!

Follow Scholastica and ISMTE on Twitter at @scholasticahq and @ISMTE for more Twitter chat announcements and to get a preview of the questions we’ll be covering during this chat!