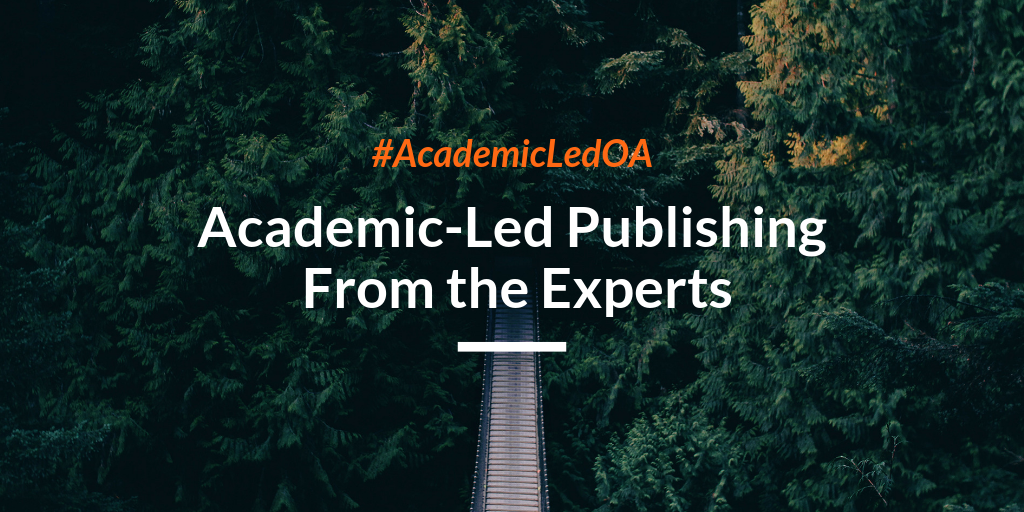 We’re continuing our Academic-Led Publishing From the Experts blog series! In this post we welcome Ross Mounce, the Open Access Grants Manager at Arcadia Fund. Mounce is also involved with Open Knowledge and the Open Science Working Group. He advocates for open access and open data. In the interview below he discusses the many initiatives that Arcadia Fund has launched to advance open access to research as well as his thoughts on the roles of scholars and insitutions in supporting academic-led publishing.

This blog series is a lead up to the inaugural Academic-Led Publishing Day on February 7, 2019. You can learn more about the event in this blog post. We hope you’ll take part!

We invite you to share this interview and your thoughts on academic-led OA on Twitter using the hashtag #AcademicLedOA!

Can you share what your current OA advocacy focus has been around for those unfamiliar? What initiatives have you been working on or promoting?

RM: I do not see what Arcadia Fund does as ‘advocacy.’ We don’t advocate for change as the need for change to open access is obvious and well evidenced already. We help make change. Arcadia Fund mainly operates in three areas within OA:

This year Arcadia has announced a raft of new initiatives, including grants to:

Arcadia Fund has also joined the Open Research Funders Group (ORFG) and sponsored the 2018 eLife Innovation Sprint in Cambridge, ELPUB 2018 in Toronto, and the 2018 Workshop on Open Citations in Bologna.

What do you think is the role of libraries/university departments in supporting academic-led publishing? Can you give examples of groups you think are leading the way?

RM: I think institutions have an extremely important role to play in the sustainability of academic-led publishing: they pay the salaries of academics after all. Given the exorbitant costs of publishing services with legacy academic publishers, institutions could and should do more to support academic-led and library-supported publishing. The Open Library of Humanities led by co-CEOs, Dr Caroline Edwards and Professor Martin Paul Eve is a shining example of what can be made possible when publishing is in the hands of smart academics, with good governance, an innovative business model, institutional support from Birkbeck, and a not-for-profit registration. Open Book Publishers (OBP) founded by Rupert Gatti and Alessandra Tosi, academics from the University of Cambridge are also highly regarded at Arcadia: we have directly supported the publication of several open access books with OBP in conjunction with our environmental and cultural projects including ‘What Works in Conservation?‘ and ‘From Dust to Digital: Ten Years of the Endangered Archives Programme‘ and ‘Remote Capture: Digitising Documentary Heritage in Challenging Locations.’ OBP is part of a new group called ‘ScholarLed‘ which is well worth following. I’m also immensely impressed with the transparency and efficiency of Language Science Press. Scipost is also being excitingly innovative, beyond being just journals managed by professional scientists.

Finally, we should also not overlook the work of thousands of numerous academic-led single journals like Conservation Evidence, Internet Archaeology, Volcanica, First Monday, the Journal of Machine Learning Research (JMLR), Discrete Analysis, Advances in Combinatorics and Algebraic Combinatorics. Academic-led journals and presses demonstrate that publishing does not have to be ridiculously expensive, whilst retaining the highest standards of production and peer review. Although academic-led journals are led by academics, let us also not erase the brilliant support and organizational work done by librarians and libraries that have done the foundational work to enable some of the academic-led journals I have mentioned. Academic-led journals can live in a happy symbiosis with libraries and librarians. I must admit I have difficulty knowing exactly what is an academic-led press and what isn’t because of the happy symbiosis in some cases between libraries, academics, and certain journals.

Do you think that the majority of journals will be academy-owned in the future and why? What do you think would be the main benefits if this were the case?

RM: The question of ownership is a tricky one. I’d like to think the answer might be no - but for good reason. I think philanthropic research funders, government research funders, charities, and NGOs might increasingly ‘own’ or use open-source publishing platforms and processes. When the source code is openly-licensed and the content published is openly-licensed, what exactly is meant by ‘owned’? I can see ownership being more shared, shareable, and forkable in the future. Beyond just ‘academy’ to society and humanity ‘owned’ scholarship. Scholarship and the means of its production as a public good. So if anything this is a trick question: I would hope that if we look far enough into the future there will not be ‘journals’ anymore, only platforms, DOIs and other persistent identifiers, service providers, links, and aggregators. Scholars will read and value the intellectual content of published works and will not particularly need a distinct metadata label of the container it was published in.

What steps do you think scholars should be taking on an individual level to help further OA and academy-owned publishing?

RM: I would urge people to find out more about the diversity of open access journals, publishers, and business models. The Open Access Directory is an invaluable resource for this. To some ‘open access’ has come to mean “pay a $3,000 APC” to be published, which is sad because it doesn’t have to be like that. Many of the publishers and journals I have named in previous answers operate innovative, efficient, low-cost, high-quality publishing operations and that infuriates the legacy publishing industry. Stuart Shieber’s ‘An efficient journal‘ (2012) is an essential read in this regard. For those interested in open access book publishing, Sebastian Nordhoff’s ‘Cookbook for Open Access books‘ (2018) is truly eye-opening.

Find a good academic-led press or journal in your field and give it your support in any way you can by:

Understanding, posting, reading and reviewing preprints is also a big help towards open access. Likewise developing a better understanding of Creative Commons licensing and copyright in scholarly communications is also very helpful as these matters are often misunderstood. ‘The Case for the Journal’s Use of a CC-BY License‘ (Sheiber, 2012) and ‘Why CC BY?‘ (Redhead, 2012) are particularly important works to read in this regard.