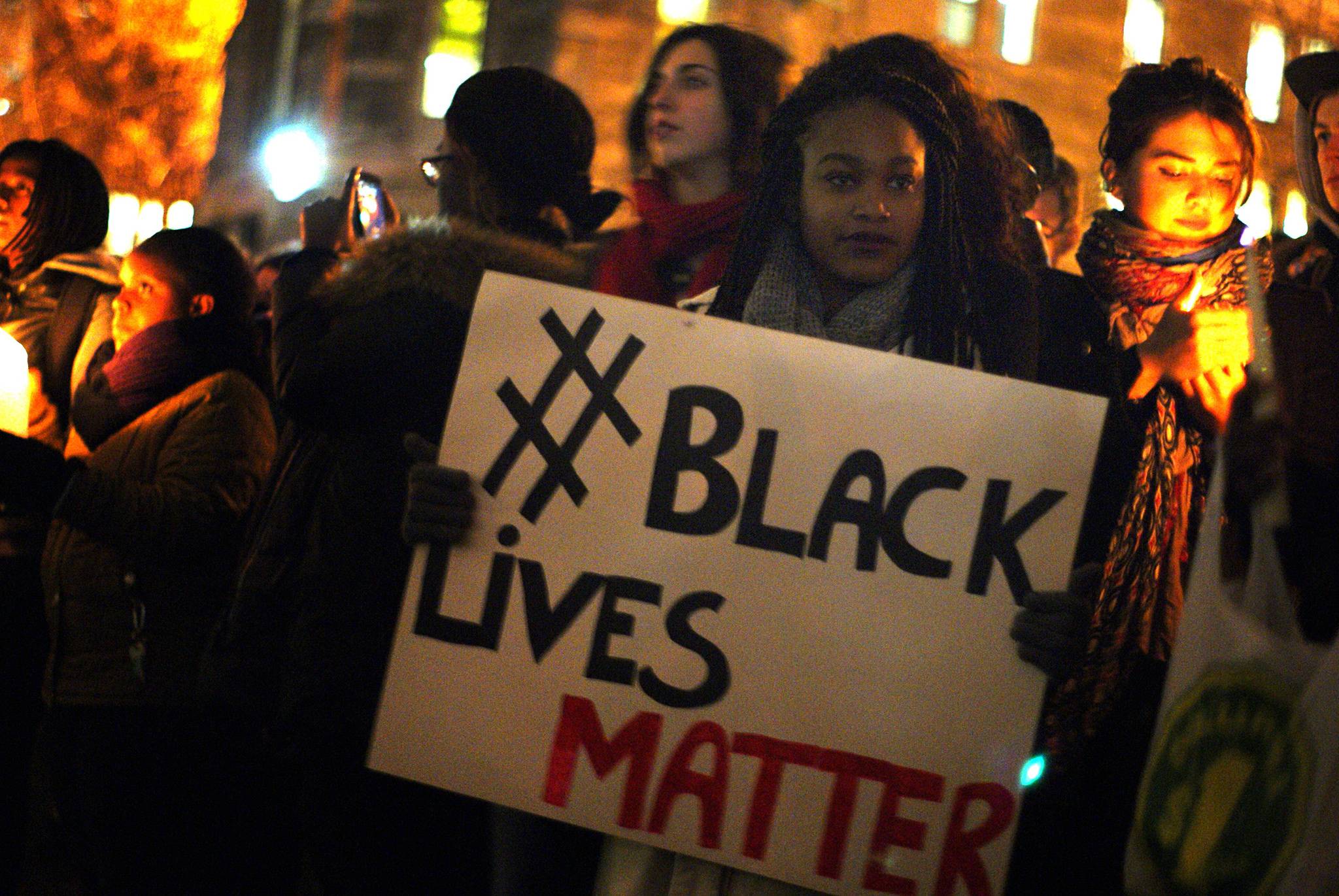 Over 50 years after the March on Washington the Civil Rights Movement continues. Today’s activists are embracing new methods of organization and communication in the internet age and they’re revitalizing the cause. A notable example of civil rights efforts has come from the Black Lives Matter (BLM) movement, started in 2012 in response to the murder of Trayvon Martin by George Zimmerman, who was acquitted of his crime. The official BLM website outlines the mission of the movement: “Rooted in the experiences of Black people in this country who actively resist our dehumanization, #BlackLivesMatter is a call to action and a response to the virulent anti-Black racism that permeates our society.”

How does today’s Civil Rights Movement compare to that of the 1950s? Where do Americans stand in terms of racial equality and what are the chief factors still holding us back? In a recent paper published in the inaugural issue of Howard University’s second journal, the Human and Civil Rights Law Review, titled “Class Contradictions in the Civil Rights Movement: The Politics of Respectability, Disrespect, And Self-Respect“ Harold McDougall, professor of law at Howard University, looks at how the civil rights movement has progressed over time and the challenges activists still face. McDougall focuses on how class tensions have challenged the Civil Rights Movement from its origins. He shares the details of the paper in the interview below.

Your paper explores how class tensions have challenged the Civil Rights Movement from its origins - can you briefly explain this?

HM: Different socioeconomic classes have emerged in the African American community since slavery, as a function of differing levels of success in the American political economy. Because where you stand is a direct outgrowth of where you sit, these differing classes and subgroups have had different agendas vis-à-vis the white establishment.

William Robinson’s book Disintegration: The Splintering of Black America (cited in my article) identifies four such groups: the Transcendent Elite, The Middle Class, The Emergents (mixed-race and immigrants), and the Abandoned. Think about who belongs in what group.

How have conflicting narratives and opinions of the Civil Rights Movement developed over time?

HM: The narratives began as a way of organizing the social lives of different black sub-groups. For example, accommodating to white power has historically made sense to one group, but not to another. These narratives have gone on to shape people’s sense of themselves, as well as how they are regarded by those outside the African American community. I found Riche Richardson’s Black Masculinity and the U.S. South: From Uncle Tom to Gangsta very helpful in this regard.

In your paper, you discuss the “respectability politics” that African Americans face - can you explain this a bit as well as the consequences?

HM: “Respectability politics” today might mean simply “go along to get along,” but its emergence not long after slavery was bound up in feelings of inner-directed guilt and shame, trying to figure out how one human being could bring themselves to enslave another. One answer that more than one group of oppressed people have arrived at historically is, “it must be my fault. I must have done something wrong, behaved badly. Why would these people treat me this way? Maybe if I behave more like they do, they will see my humanity.”

My students seem very aware of the price of “respectability politics” today. In the article, I quote a successful black New York lawyer who talks about training his sons to always behave in public in ways that white people will approve, that will make them feel comfortable, that will keep them from calling the police. This is a price my students are no longer willing to pay.

As one of them put it, though respectability practitioners can access mainstream resources, at what cost do they do so? “What community has been lost?,” he asked. “What family? What culture? Safety net? Home? Where can the battered spirit return to, to be healed?”

In what ways has black culture become commodified for white audiences and what have been the impacts?

HM: From Uncle Tom to Gangsta has a lot to say about this, and one of my students did a very good research paper on it. What I call the “politics of disrespect” grows out of oppositional narratives as old as slavery itself, originating with African myths of the trickster who outwits more powerful opponents, eventually layered over with a one-fingered salute to the establishment those opponents occupy.

Small wonder that this “gangsta” image now serves as a symbol of defiance to the establishment for all who feel cabined in and diminished by it, including rebellious white youth ready to pay enormous sums to wear the clothes, groove to the music, ride the defiance. Ironically, the sums wind up in the pockets of guess who? The establishment. Ben Barber’s book on consumer culture, Consumed, is great on this.

Unfortunately, the gangsta image is also very unnerving for police, and black kids — even middle-class black kids - reveling in this genre the way white kids do are very much at risk.

Why does Black Lives Matter have wider appeal than the Civil Rights Movement? How do the two movements compare?

HM: To the extent that the traditional Civil Rights Movement is based on the politics of respectability, self-conscious of and conforming to the “white gaze” as my students put it, young people are very uncomfortable with it. Black lives should matter even if they don’t look or act like white lives.

BLM’s strategy focuses on building power in the community to hold the authorities directly accountable. The civil rights establishment, on the other hand, is very professionalized, using litigation and lobbying strategies that are typically practiced by elites as representatives of the community.

My students feel strongly that black middle class people need to re-connect with their former communities and earn the trust and respect of those left behind. That growing disconnect, chronicled by Bill Robinson as I said earlier, can undermine the effectiveness and legitimacy of the civil rights establishment.

In your paper, you discuss two possibilities for addressing race in the future - a “race conscious” society and a “color-blind” one - can you speak on this?

HM: A color-blind society is probably not realistic, and certainly not for African Americans who are less than middle class. The notion seems to have originated with Justice Harlan’s dissent in Plessy v. Ferguson, but there are echoes of it in Martin Luther King’s “I Have a Dream” speech.

For the poor, the working class, and even the lower middle class, race consciousness provides a certain degree of social capital, what I have elsewhere termed “cultural DNA,” that can be used to solve problems and support a community context. This is very similar to what voluntary immigrants have historically done in this country, and was actually quite common in the African American community before desegregation.

As I suggested earlier, even my students, who will be financially and socially able to live “color-blind” lives, question the sacrifice of their history, culture, and folkways those lifestyles entail. They want to tell their stories to their children, teach them their history, and correct false and misleading narratives when they appear, regardless of the sponsor. They feel people of African descent have their own ways of solving problems, rooted in their history and culture, and have the human right to assert them.

What does this mean for the future?

HM: It means that African Americans should not have to alter their identity to gain acceptance. No one should, and we need to question a social context in which that is perceived to be necessary. Alicia Garza, a BLM founder quoted in the article, put it this way: “[W]e need less watered down unity and more active solidarities with us, Black people, unwaveringly, in defense of our humanity. [All of America’s] collective futures depend on it.”

The challenge now is to avoid media distractions and build capacity in black communities. As historian Robin Kelley said in The Nation magazine, “[s]trong community-based organizing really matters.” Neither respectability politics on the one hand, or social media-based, “virtual organizing” on the other, can do the job alone. If we don’t build on what I call “self-respect,” employing and nurturing our own “cultural DNA,” we could wind up a generation from now wondering what happened, wondering how the raw energy of today’s protests ebbed and disappeared, leaving behind no fundamental improvement.

The vehicle I suggest is the Citizen’s Assembly, to organize an ever-increasing engagement by the broad base of the black community, sharing the responsibility, sharing the joy, avoiding burn out and developing new (and younger) leadership all the time, in an organic and rejuvenating process, a “beautiful struggle“ that might take generations.