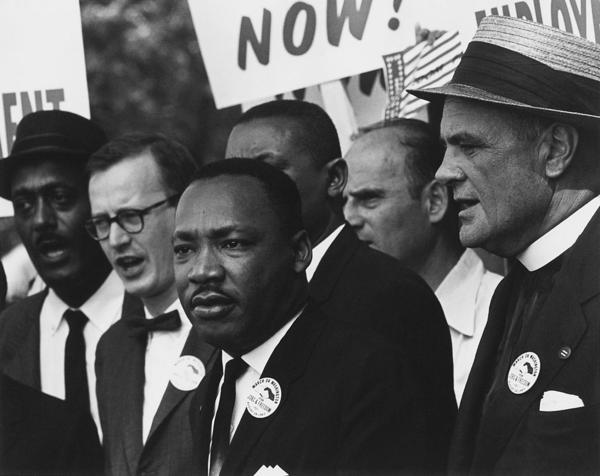 Where do we go from here? That’s the question that Dr. Martin Luther King Junior posed in his fourth and final book published in 1967, just one year before his assassination in April of 1968. The book, Where Do We Go from Here: Chaos or Community?, was an appeal to the public to not lose sight of the work still to be done to recognize and protect civil rights and to address broader social inequities threatening human rights in America and around the world. It was a cautionary message but also one of hope for a more just and kind world that Dr. King believed to be possible.

In an article forthcoming in the Harvard Law and Policy Review, “Economic Equality and Social Solidarity: MLK’s Neglected Legacies,” professor of law at Howard University Harold McDougall delves into the key themes of Dr. King’s last book and his thoughts on how to answer the question “where do we go from here?” Professor McDougall shares the details of his article in the interview below.

In your review of Dr. King’s last book, Where Do We Go From Here: Chaos Or Community?, you said that Dr. King predicted many of the key issues that society faces today. In what ways do you think Dr. King was ahead of his time?

HM: There are so many ways. Dr. King warned of the inevitable resurgence of white supremacy, and the threat to democracy presented by those who want to maintain racial subordination at any cost. Appeal to such forces became part of the Republican Party playbook under President Nixon (Nixon’s Piano documents these developments). Reagan took it further; Trump has taken it further still.

At the same time, Dr. King was struck by the fragility of white privilege, the anxiety over possible losses in “preferred” economic and social status, leading to acts of “meanness and violence” toward people of color. The recent weaponization of 911 calls, against Black people in parks and swimming pools, stores and even in their own homes and neighborhoods, illustrate the point.

Dr. King saw Americans declining morally and spiritually the richer they became, noting that a “withered sense of justice” in the face of “glaring contrasts between poverty and wealth” at home and abroad could corrupt the lives of all Americans. This was before “the 1%” became part of our language; today’s Presidential campaigns drive that point home.

He observed “large power blocs” who talked about peace but profited from war. He saw war as a conduit of life and resources away from the poor and working class to benefit the rich, a “wasteland” where the “expenditure of resources knows no restraints,” and any prosperity we might achieve is “enthusiastically squandered.” Here we are, looking down the barrel of a new Middle Eastern conflict (barrels of guns and barrels of oil seem to go hand in hand).

While Dr. King is best known for his work to combat racism, his efforts expanded to combating poverty and militarism, recognizing the complex relationships between the different issues in America and the world. Can you explain how Dr. King approached these issues individually and together and how you think it applies to the world today?

HM: Dr. King saw a “new turn toward economic justice” as a key strategy for responding to the challenges of racism, poverty, and war simultaneously. Specifically, he called for a “Bill of Rights for the Disadvantaged,” including a guaranteed national income and improved access to education, employment, housing and health care. (Bernie Sanders referred to many of these ideas on MLK day this year.) King had also begun to talk about the need for reparations for the people of African descent in this country, a project recently endorsed by the United Nations.

The only piece he missed was climate change, and that by only be a year or two. (The first Earth Day was in 1970.) The Green New Deal stands out as a key strategy, one that also responds to some of the challenges with which Dr. King was more familiar.

In your article, you say that while Dr. King was often depicted as a solitary figure, in reality, he was working to develop a long-term social justice network. What was Dr. King’s true vision, and how far do you think we have come towards reaching it?

HM: Dr. King wanted the movement for social justice in this country to move beyond a “small striking force” to become an “informed and determined constituency demanding social reform,” organized “solidly and simultaneously in thousands of places.”

I think we’re beginning to see this. Young progressive Democrats are being elected to local and national office through grass-roots campaigns. There are mass movements around gun control, climate change, and police violence. But these gains will have to be consolidated and protected with a strong community base.

Dr. King asked, “where do we go from here?” Can you share your thoughts on the answer today and the role of creating civic infrastructure and ultimately citizen’s assemblies?

HM: Dr. King foresaw “revolutionary times” that would provide an opening for “new systems of justice and equality.” I think that’s what the national debate is about right now. Everything comes down to all of us, every one of us, working past our divisions and treating one another fairly, justly, and with compassion.

To get there, we need that strong community base I mentioned earlier. That requires rebuilding community in our country, and on a manageable scale. I believe we do that by creating civic infrastructure: developing small groups in neighborhoods and at workplaces that engage in democratic deliberation, independent of party politics. From there, we create citizen’s assemblies by linking those small groups together into a lattice-work of significant scale, able to hold politicians and big business accountable.

We could further strengthen our civic infrastructure with “Social Justice Academies” in neighborhood schools and at workplaces. These could provide opportunities for training in the skills of social justice, echoing Dr. King’s admonition that the broad base of the population deserved the opportunity to learn how to do democracy through “discussion, practice, and reading.” They could also be places for job training and launching pads for collaborative activity such as shared child care, community mediation, and food and energy coops. (Some of my article documents the work Howard students are doing in this area, in true “rebellious“ fashion.)