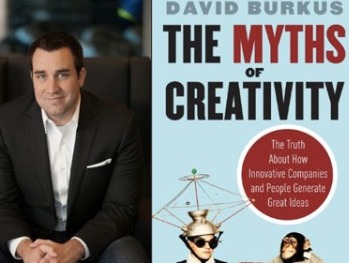 Can we make creativity happen? Or are moments of creative breakthrough out of our control?

I recently had a chance to interview David Burkus, professor and scholar of management and strategic leadership at Oral Roberts University, about the titular puzzle of his new book The Myths of Creativity: The Truth About How Innovative Companies Generate Great Ideas.

“Eureka!” shouts the lone artist from her tower, as she begins furiously recording her latest surge of divine inspiration. Simultaneously, somewhere in a bustling metropolis, there is a business team vigorously shaking hands and patting each other on the backs to celebrate a job well done. “It must have been a combination of our innovative genes and harmonious brainstorming sessions!” they say.

The above anecdotes may be a bit of an exaggeration, but we are all familiar with plotlines of people achieving great ends due to lucky breaks or inborn talents. Of course, these triumphant closing chapters aren’t showing us the whole story. There is in fact much more intent behind creative breakthroughs than we often credit or realize.

The reality of creativity

In his new book The Myths of Creativity, David Burkus sets out to correct the faulty beliefs surrounding creativity by investigating its true causes. Burkus said that he was compelled to focus his research on the workplace, to discover why and how the most creative teams are able to foster business innovations. Burkus discovered that the keys to creativity in businesses are not in companies’ “raw materials” of talent. “It’s in, as I started to call it, the stories that they tell themselves, and the way that they think about their process,” he explained.

Burkus said he believes the biggest myth barring many of us from our creative capabilities is the notion that there is a pre-determined personality trait that makes some more creative than others. “What is most sort of ironic about that myth is that everybody had a time when they were in kindergarten and they were incredibly creative. Then most reach their adult years and fall wildly out of practice,” said Burkus. “The difference is creative people never stop telling themselves that they are.”

Burkus’s hope for The Myths of Creativity, is that it will help make research on creativity in business accessible to those in the field. “My goal forever in my career has been to sort of bridge the gap between what practitioners are doing and what scientists are studying,” he said. “Right now the two camps speak different languages a lot of the time, and that’s a problem.”

Burkus said the main challenge he sees in present research dissemination that causes this “language” disparity is that academia is built around the idea of doing research for an academic audience, rather than external professional communities.

“The impact on practitioners doesn’t happen unless there’s somebody who can go to researchers and talk to them about the research they did in a common language, then go back to their team with that insight,” said Burkus. In order for practitioners to be able to do this, Burkus said it is crucial that information be presented in a way that is applicable to business operations.

In addition to focusing on practice-based scholarship in his book, in his role as editor for Strategic Leadership Review Burkus said he and his team have made it their mission to find and publish the most accessible research in the field. “We’re trying to trend the science into a sort of digestible format [for practitioners] without losing any of the empirical rigor,” he said. “That’s been the primary goal of the journal, which in itself takes a lot of finagling and creativity.”

In his experience, Burkus said the most impactful articles on strategic leadership are studies that clearly inform practice, and those that combine research and conceptual modes from previous findings to generate novel concepts. He offered recent studies on brainstorming as an example. Brainstorming has long been credited with sparking new ideas, but has also been distorted by the popular myth that group thinking should be a non-confrontational process.

“But if you go into an organization and find that no one is arguing about the quality of a product, that means no one is going to come up with new ideas because everyone who has new ideas is too afraid to share them,” Burkus explained. Burkus said this realization was proven by researchers about 40 years after the term brainstorming was coined.

In addition to recognizing and publishing research that will spark innovation, Burkus said academic journals require more creativity than many think, particularly with regard to promotion. “There’s an assumption by a lot of journals, by a lot of researchers, by a lot of editors that their goal is to produce a great quality journal, which is true,” said Burkus. “But the purpose of that journal is to push the body of knowledge forward.” As the number of academic journals rises, Burkus said it is becoming increasingly important that editors be creative in their promotion in order to stand out among the crowd.

In response to the growing need for creative promotion in journal publishing, Burkus said he began running a blog and podcast called LDRLB (pronounced “leader lab”), which has become a primary means of promoting Strategic Leadership Review. “Beyond the person getting published spreading the word throughout their networks, our first step is broadcasting article topics through that podcast to the several thousand people who listen to it and follow the Twitter account associated with it,” said Burkus. He said that promoting journal topics through mainstream media has proven an effective way to entice viewers to read associated articles.

Online platforms including social media, blogs, and video and audio editors, are making it increasingly easier for journals to discover and create innovative means of article promotion. “When we look at the creative processes that people go through there are periods where you are playing around with combinations of ideas,” said Burkus. “Technology is incredibly useful for this and of course delivery, which is a great thing.”

At the same time, Burkus warned that the abundance of well-thought-out ideas on the internet can be a hindrance to innovation, as many find themselves bookmarking the creative approaches they are drawn to, but failing to follow through with the final steps of creating a novel product. “If we continue to do that you end up with two sets of people, the ones who make and the ones who consume,” he said. “And I don’t think that’s good for anybody.”

So how can we become fearless innovators?

Burkus said the key to creativity is developing self-assurance in the face of uncertainty. “I think you need to have a belief in yourself that you can do it, and you need to be shown a process,” he said. “A lot of times when people don’t trust themselves you can get them to trust the process.” Burkus said this of course begins with diving into a creative project, whatever that may be, and being prepared for it to take a while.

“It’s not like riding a bike, you can’t really get right back on it, it’s more like picking up a sport that you used to do in high school,” he said. “There’s a little bit of a residue there but you still need to work on your form. To be truly creative takes time. People spend 10, 15, 20 years of their life refining their craft.”

So what can we gather from the inspired artist and winning business team mentioned at the beginning of this article? They probably faced more obstacles in finishing their creative projects than we’ll ever realize. The real secret behind their creative breakthrough is: they kept at it!