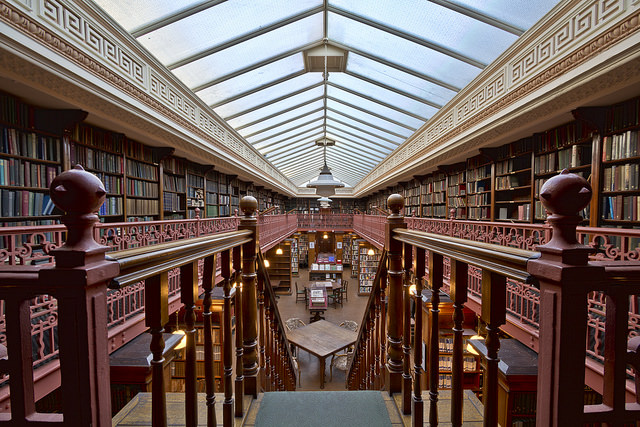 Sourcehunting. Just saying the word produces nightmares in journal editors and sends shivers down the backs of law librarians. Even the most organized of editors and librarians quake at the thought of tracking hundreds of citations, remembering who has the right book, when it’s due, and if it has been returned. But following some simple “best practices” can silence the fear.

Biddle Law Library at the University of Pennsylvania decided many years ago that there had to be a better way to handle sourcehunts. As the Resource Sharing Librarian I saw many issues pop up during the sourcehunt process, most inadvertently caused by the individual Associate Editors (AEs) who were placing interlibrary loan (ILL) requests for materials not available. This resulted in multiple ILL requests for the same articles and books, ILL and campus materials not being returned on time, and senior editors wondering if a resource had even been requested. After one-too-many Executive Editors ran into my office saying “we’re going to print in 1 day and we never received citation X”, followed by me calmly explaining that an email was sent to their AE 4 weeks ago alerting her to the fact that the lending library said her citation was wrong, but that AE didn’t do anything after that, I knew the system needed an overhaul.

Working with our law review we realized we needed a single journal person to track all sourcehunt work. We petitioned the Law School administration to create a new Research Editor (RE) position. This position would be responsible for placing all ILL requests for their journal. What a relief! All requests from AEs were filtered through that one person. Each journal created their own procedures for the AEs to alert the RE that an ILL needed to be placed, including why they couldn’t pull the material if it was owned by one of the libraries, whether because it was signed out, missing, etc. After a fairly successful year of the new RE position it was easy to have it extended to all Penn Law journals. The RE position quickly became a mainstay of all journals. Life was good and I thought everything was resolved.

Wrong! I still couldn’t get ILL books back on time, campus books were returned late and accrued fines. First, to resolve the campus material issue, I arranged for campus libraries to treat the journal members as teaching assistants. When AEs checked out books as proxies for their journals the due date was the end of the academic year, no matter when they checked out the material. This step resolved almost all late books on campus.

But a major problem still existed – the journals didn’t know what books they had in their offices, when they were due, or if the books had been returned. Solution? A spreadsheet.

I worked with the REs and each journal created their own spreadsheets that tracked basic information, including:

This simple spreadsheet created by each journal took the guesswork out of figuring out - “what happened to that source?”, “when is this due?”, “I think I returned that.”

The major function of the RE is to place ILL requests for their journal. After I train the REs in the nuances of using the OCLC WorldCat database, they search for each source not filled and initiate a request by using the ILL process in place for all Penn Law students. Using the information provided by the AE, the RE places the request and indicates in the appropriate comments box the reason ILL is needed, whether the book is missing, signed out, not on shelf, etc. The ILL database alerts me to any requests placed for materials held by Biddle, our campus libraries, or an adjacent university’s library where our students can borrow. If I receive an alert it means the material requested is owned by one of those libraries. If that’s the case and there is no reason for ILL the request is returned to the RE noting it is owned by one of those libraries. The RE then consults with the AE.

What are other reasons a request may be returned? If there is an incomplete citation, the PDF is available, or if we are just unable to get the material through ILL. In the case of this final resort the editors will need to go back to the author for verification. Once these processes were established and I would mention our RE position and the spreadsheets to law librarian colleagues, I expected other librarians to respond to the system saying their journals had been following a similar process for years. But, this was not so. I received calls from law librarians and journal editors around the country asking for information on what we were doing. As more time passed and students became even more proficient in using spreadsheets, I expected most journals to be doing some variation of this system as it results in a more efficient sourcehunt process. However, I continue to get calls and emails from colleagues requesting information on the process, which they will then share with their journal editors.

Does the creation of the RE position and source tracking by the journals eliminate all sourcehunt problems? No, but for the journals it has eliminated almost all “did I request/return that/where is it?” dilemmas. For Biddle it has enabled the ILL department to more quickly and efficiently obtain materials for the journals. Siri Carlson, this year’s University of Pennsylvania’s Law Review Research Editor, noted “It’s helpful to have one [journal] person managing ILL information as it streamlines the communication around requested sources and allows more efficient troubleshooting when problems in source requests arise.” For us it has been a simple win-win solution.