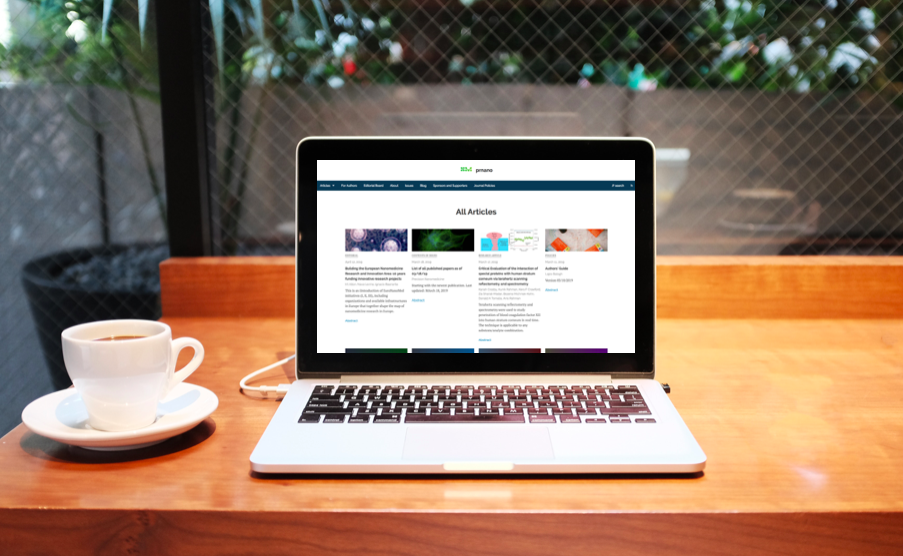 After serving as editor-in-chief of Nanomedicine: Nanotechnology, Biology and Medicine for over seven years, Lajos Balogh knew that he had the skills and expertise needed to run an academic journal. An ardent open access (OA) advocate, Balogh also knew that he wanted to promote open science in the field of nanomedicine. So when his editorship contract at Nanomedicine NBM ended in 2016, Balogh decided to channel his publishing knowledge to a new endeavor. He and a group of fellow associate editors and editorial board members from Nanomedicine NBM left Elsevier to embark on a publishing operation of their own.

The group of scholars launched the fully-digital OA publishing organization “Andover House“ in 2018 and started their first OA journal Precision Nanomedicine (PRNANO) the same year, which uses Scholastica’s peer review and publishing platform. Balogh serves as editor-in-chief of PRNANO, which became the official journal of the European Foundation for Clinical Nanomedicine.

“We have created our own not-for-profit publisher thus the journal’s and the publisher’s interests are naturally aligned,” said Balogh. “We’re publishing high-quality OA research by the community and for the community.”

Balogh and fellow editors are putting the needs of the academic community at the forefront of their new publishing initiative. Their objective for Andover House is “to disseminate peer-reviewed scientific reports and individual articles online in academic journals that are open to the scientific community and accessible by the public without additional charge to readers and libraries.”

The start of Andover House, a fully-digital OA publisher

For Balogh and his fellow editors, the idea to start Andover House was somewhat spontaneous. They were surprised to learn that Elsevier would not be renewing Balogh’s editorship at Nanomedicine NBM and they initially submitted a collective letter, signed by 78 associate editors and editorial board members, requesting that the decision be reversed. But, as Balogh explained in “The Story of Precision Nanomedicine – the Journal,” when Elsevier denied the scholars’ request “similar to the mutiny by Lingua’s editors, we set out to launch our own OA journal to promote all progressive and rational aspects of nanomedicine including theory and practice while exercising good publishing practices.”

The decision to start Andover House and PRNANO came with the realization that they could easily manage their own publishing operations online. “We said this cannot be that hard. Especially now that it’s a new era of online journals,” said Balogh. “You don’t have to have printers and all of these things. It’s much easier to publish journals with digital tools. So we decided, why not.”

Balogh and his team determined that they would need to become an official publishing entity in order to launch a journal with a registered International Standard Serial Number (ISSN). So they quickly got everything in order to form the publisher Andover House. “A journal cannot be a legal entity,” Balogh explained. “So we applied to become a not-for-profit publisher.”

Once Andover House was established, Balogh set out to find an online publishing platform the team could use to launch their first journal. He said for Andover House, finding an easy and intuitive publishing solution was paramount, especially since the editors were juggling both the new business and publication.

“We have to build both the journal and the publisher simultaneously, which is a challenge even with our multi-year experience,” said Balogh. “The top priority is to consolidate these individual contributions into two interconnected organizations, while tackling the challenges on both sides.”

Initially, all of the publishing platforms Balogh found required months of set up. Then he came across Scholastica and saw that they would be able to get their new journal up and running in a matter of days. “Looking for a good publishing system was clearly the way to go—no one has to reinvent the wheel,” said Balogh. He and his team were able to quickly create a Scholastica account for PRNANO and started the journal without delay.

When it came time to launch PRNANO Balogh took lead, confident in his abilities to organize the publication. “I felt sure of myself, because I have written about 200 scientific articles and I was an editor for seven years. I’ve been on all sides and I can see things from the perspective of the editor and an author too,” said Balogh. “I also felt that I owed something to the 70 people who put their principles first and stood up for me and for us in general.”

Balogh and fellow PRNANO editors came together quickly to form peer review and publishing policies and processes and to start soliciting their first articles. “For now, it is possible to manage everything with a small group,” said Balogh. “I have 12 associate editors who are experts in their field. I think we have a very strong team.”

PRNANO has already published four issues and is working towards its fifth. The journal makes articles available on a rolling basis and then organizes them into quarterly issues in January, April, July, and October. The editors also run a journal blog where they publish updates in the field of nanosciences and nanotechnologies. All of the journal’s content is licensed under the Creative Commons CC BY-NC-SA 4.0 license.

“The mission of our journal is to promote all practical, rational, and progressive aspects of nanomedicine including theory and practice,” said Balogh. “Authors are invited to send submissions in basic science, translational, preclinical, and clinical research. PRNANO accepts original manuscripts, as well as replication studies and discussions of negative results as long as they are clearly marked as such and move the field forward. The aim and scope of the journal is to provide a good quality and supportive publishing forum with a quick turnaround time for nanomedicine researchers and to provide reliable and cutting-edge information to their societies and to libraries without additional cost.”

As PRNANO progresses, Balogh said he knows the main challenge for him and fellow editors will be scaling both the journal and Andover House’s publishing operations. “We’re really building the journal and the company in parallel,” said Balogh. “It’s a process.”

Balogh said for him and his team, using Scholastica to manage peer review, host the journal’s website, and publish open access articles and issues has enabled them to work more efficiently and keep moving forward. “Scholastica’s editorial system is a really simple and user-friendly one. It is a great fit for our needs,” said Balogh. “We like the website and we’ve been working with Scholastica to set it up in the ways we need.”

Up next for Andover House and PRNANO

As PRNANO publishes new issues, Balogh said they plan to focus on promoting the journal as a leader in its field with hopes to soon have a Journal Impact Factor. “We need a lot of readers that will hopefully read and cite those articles in the first three years,” said Balogh. “We’re trying to use not only social media but our personnel networks first to establish credibility. If you looked at the list of editorial board members, every one of them is an active person. It’s not just decoration.”

Balogh said he and his team aren’t slowing down any time soon. They’re working to develop PRNANO’s reach and reputation, and they’re eager for the future of Andover House.

“We want to keep growing, gain more credibility, and extend our influence and popularity by connecting to and aiding related societies and meetings,” said Balogh. “Respect can be built only on the personal experience of scientists and by building long term value. That takes time, patience, and collaborations.”