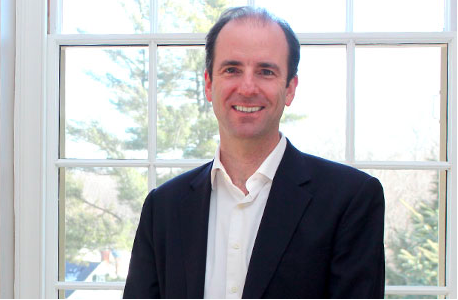 Kenneth A. Adams is a leading consultant and speaker on contract drafting, and author of “A Manual of Style for Contract Drafting” (American Bar Association 3rd ed. 2013). Adams is currently an adjunct professor at the University of Notre Dame Law School. He previously taught at the University of Pennsylvania Law School from 2006-2012. His website and blog are at www.adamsdrafting.com.

Notre Dame Law School adjunct professor Ken Adams is not afraid to change up the status quo in contract drafting, both in what he teaches and how he teaches it.

Rather than simply lecturing to his classes about traditional contract drafting, Adams gives his students the opportunity to learn by doing. Each year since 2006 Adams has brought real-world contract lawyers into his classroom for interactive exercises including mock negotiations and contract law panel discussions. He culminates his courses by having students redraft an existing contract for a not-for-profit company. In the process of allowing his students to redraft a professional contract, Adams gives them the opportunity to think beyond the conventions of traditional contract writing, wherein lawyers create new contracts by slightly modifying the language of existing ones. Adams encourages his students to instead be more critical of their language and use reliable guidelines to write clearer and more concise contracts. His book A Manual of Style for Contract Drafting serves as a guide for his students and contract lawyers around the world.

I came across a post on Adams’s blog about his interactive contracts coursework and was eager to learn more about his teaching methods and innovative approach to contract law. Here’s what he had to say.

When did you start including interactive elements in your contract law classroom and why?

I began doing panel discussions in 2006, when I started teaching contract drafting at the University of Pennsylvania Law School (as a lecturer). Initially they were in-person, with Philadelphia lawyers participating, but then I shifted to video chat—it requires less of a commitment from the panelists, and it allows me to tap into a broader group of contacts. This year’s panelists were Steven O. Weise, of the law firm Proskauer, and Glenn D. West, of the law firm Weil (both participating by video chat), and John FitzPatrick, U.S. counsel for the global company LEONI Wiring Systems, Inc. (present in person).

In 2006 I also started making redrafting projects part of my teaching. Initially, I did projects with companies—HP, The Hartford, and others. Then I shifted to not-for-profit organizations, on the grounds that they probably have less of a budget for this sort of legal work and so might well jump at the chance to have us offer our expertise. The organizations that I worked with in previous semesters include The Breast Cancer Research Foundation, World Wildlife Fund, Inc., and Big Brothers Big Sisters of America. This semester’s project was with Girl Scouts of United States of America.

This year was the first time I had outside lawyers do mock negotiations. Molly DiBianca and Dan Schwartz, both employment lawyers and bloggers, discussed the terms of an employment agreement. And Michael Fleming, an in-house lawyer, negotiated with Brian Rogers, a deal lawyer and blogger, the terms of a confidentiality agreement.

I wish I could say that solid pedagogical research underlies all this. Instead, I make the outside world part of my course simply because it makes things more interesting and more engaging for me and, I hope, my students. I’m also eager to show my students that transactional lawyers constantly wrestle with nuances of contract drafting. And since my students are on the verge of joining the outside world, I think it best that they hear other voices in addition to mine, as I occupy a pretty specialized niche.

I made a point of including people who have an open mind as to the problems facing traditional contract drafting and how we can go about addressing them—I’ve learned that including proponents of the prevailing inertia doesn’t add much to the conversation. But the outsiders who participate aren’t there to endorse my view of the world—they’re all very practical, with ideas of their own.

What is the traditionalist view of contract drafting, and how is it evolving?

Traditionally, you draft contracts by copying. Any new transaction is going to closely resemble other transactions, so the urge is to copy, on faith, the language of templates, and precedent contracts, making only whatever tweaks are required to reflect the new transaction. Furthermore, according to traditionalist logic, you’re just copying, so there’s no need for rigorous guidelines—we can make do with whatever random conventional wisdom we’ve picked up along the way. And if you’re just copying, who needs training?

Combine abject copying, lack of guidelines, and lack of training and what you get is dysfunction. Even the most prestigious law firms and the biggest companies churn out contracts that are a mess. The result is that companies waste vast amounts of time and money, hurt their competitiveness, and expose themselves to unnecessary risk of dispute. The first step to fixing that is to come up with rigorous guidelines for clear and concise contract language. In [my book] A Manual of Style for Contract Drafting, I survey the building blocks of contract language, saying what works best and why. You draft better contracts when you have access to better raw materials. And contract drafting becomes less contentious if you have a generally accepted set of guidelines for contract language. I think that things are slowly heading in the right direction.

Could you tell me more about your contract redrafting projects with not-for-profits?

From my students’ perspective, I think that the value of those projects is that we’re not drafting a contract based on some scenario that I dreamed up. Instead, we’re doing it for an organization that has a real-word need for that contract. Although we make it clear that we’re engaged in a teaching exercise, it’s as if my students were dealing with a client. That makes things less predictable. And you also have the satisfaction that comes with helping an organization that helps others.

Every semester I shake some trees to see who might be interested in working with us. This semester, it was the Girl Scouts. They’re looking to do a new kind of transaction, one not covered entirely by the template they use for related transactions. Furthermore, their current template is of the traditional sort. So my contact at the Girl Scouts explained to me what they had in mind; I conveyed that to my students. Then I did my version and my students did their version. I graded theirs; they looked at mine, giving me a lot of good feedback. I revised my version, thereby making it more of a joint effort, and then I sent it to the Girl Scouts. Our final class consisted of a conference call between us and three people from the Girl Scouts to discuss our version, why we did things the way we did, and what additional changes might be in order. I ended up sending them a version to reflect changes discussed during the conference call.

How have you seen your students develop their understanding of contracts over the course of these interactive classes?

Contract drafting is a tough subject. In effect, I ask students to learn a new kind of writing, one that’s limited and stylized—it’s analogous to software code.

And I don’t try to teach a training-wheels version of contract drafting. We could spend our time drafting contracts for, say, someone to shovel the snow from your driveway, but that’s not what lawyers are asked to do. Instead, once you start working with contracts, you’re immediately faced with issues that call on a full range of expertise. I structure my course accordingly, and my students are subjected to extreme g-forces on a very steep learning curve.

At the beginning they’re rather alarmed at what they’re being exposed to. I expect a level of attention to detail that I suspect they’re not used to. For example, in grading a six-page submission, I might add seventy comments critiquing their use of words and phrases or how they addressed a given issue. By the end of the course, they’re more comfortable. And I think it comes as a bit of a relief when, at the end of the course, I give them my version of the not-for-profit contract to critique, rather than having me yet again clinically dissect something that they’ve submitted. One lesson that I hope to impart to them is that this is a demanding subject, perfection is an illusion, and even the guy who wrote the book can be counted on to screw up sporadically.

One thing I still have to work on is our conference call with the not-for-profit. In our call with the Girl Scouts, once I started talking, it was tough to get students to chime in. So I have in mind that next time, I’ll put the students in charge of the conversation. But for that to work, my students would have to be pretty committed to the subject. That’s why I prefer to have students who expect to do transactional work when they leave law school—it makes more sense for them to invest the time and attention that the subject requires.

What do you think is the main benefit of giving students practice-oriented work?

There’s no shortage of debate over who should be responsible for training lawyers in what they need to know to practice law. I’m not inclined to take part much in that debate. Instead, I work with all constituencies—law schools, law firms, and company law departments.

But it’s clear that you’re better off becoming acquainted with clear and concise contract language at the outset of your career, instead of acquiring a bunch of bad habits and then having someone like me come along and tell you that you’ve been doing it wrong. So I’m all for having law schools offer more instruction in the building blocks of contract language.

I’ve encountered resistance at the top law schools, where some faculty feel that you can cover contract drafting as part of a “deals” course. I accept that there’s limited space in the law-school curriculum, but it’s wishful thinking to expect that a “deals” course could come close to allowing students to acquire a basic command of contract language. Furthermore, contracts are an essential component of all transactional work, not just M&A (Mergers and Acquisitions). I suspect that those who think that contract drafting doesn’t merit a separate course aren’t fully aware of what’s involved in creating clear and concise contract language and how much is at stake.

What are your future plans for interactive coursework?

I’ll continue with my current approach, but I’ll refine what I cover in class, how I handle assignments, and how I involve outside lawyers. In particular, I’ll consider how to shift more responsibility to my students.